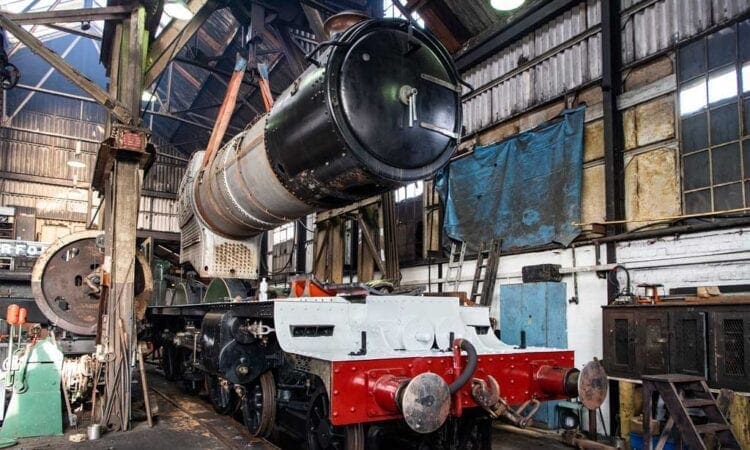 The return to service of GWR Castle, 4079 “Pendennis Castle”, passed another major milestone in mid-November as the boiler was reunited with the frames following a successful steam test.

The 1925-built icon has been the subject of a thorough restoration by the Great Western Society since it was repatriated from Australia in 2000. Work on the boiler has included attention to the stays – the crown stays in particular – seam and foundation ring rivets and a complete re-tube.

The project team completed most of the work on the frames and motion prior to turning their attention to the boiler to minimise the chance of delays using up valuable time on the boiler ticket.

Tasks tackled over the past two decades include removal of electrical fittings and an antipodean air-brake system she acquired Down Under; renewal of almost the entire drag box; new cylinder drain cocks; and the fitting of new cylinder liners.

Emma Jhita, chief executive officer, said: “This is exciting news: next year we will mark the society’s 60th Anniversary and having 4079 in action will certainly add to the celebrations.

“She has been a very special engine, ever-since the famous locomotive exchanges of 1925 and her renaissance is the latest in a series of ground-breaking projects that have become synonymous with Didcot over the past six decades.”

Latest estimates are that the Castle will enter service in early summer next year.