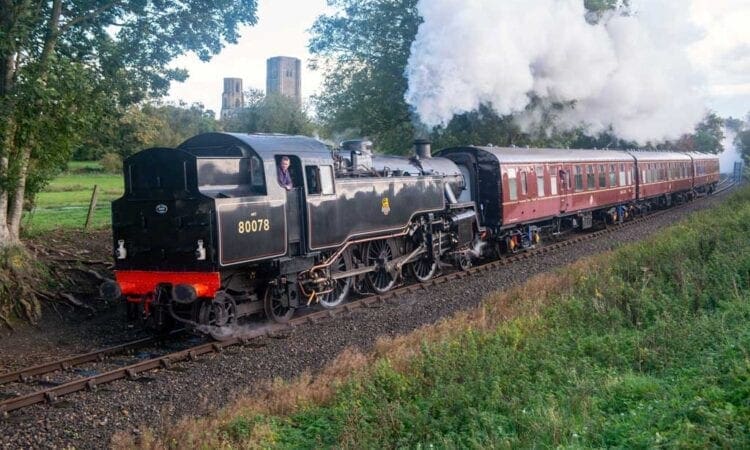 Passengers at the Mid Norfolk Railway during the 2021 running season will be surprised by the changes they will see with new and refurbished rolling stock giving a new look to the railway.

Recently the railway has been running some test trains that have allowed volunteers to update their personal operating qualifications. The opportunity was also taken to give the newly refurbished Mk1 coaches their first run out. This stock will make an important contribution to delivering a CV-19 precaution compliant service.

The test train was hauled by British Railways Standard Class 4 2-6-4T, engine number 80078, which will be on hire from its owner to the MNR for the 2021 service and will join other engines and DMUs to provide the MNR’s planned services.

The test train’s running gave a clear vision of what passengers can expect for the steam hauled trains that will form a part of next year’s passenger operating season.

By next year the maroon coaching stock available for use by the railway will be joined by Mark 1, a first class corridor coach. This coach is now being refurbished as a result of the railway’s recent successful Heritage Lottery Fund grant.

This grant was part of the recently announced Government support to Culture and Heritage organisations and was given to the railway specifically to enable the railway to adapt its activities and therefore run in such a way as to comply with CV -19 social distancing regulations. For the MNR this refurbished coach will allow a heritage steam experience to run  that is economically viable.

Charlie Robinson, Chairman of the Mid Norfolk Railway Trust Council said: “Seeing this train running is the culmination of so much hard work by our volunteers who restored the coaches and painted the running gear and also Heritage Painting our commercial partner who painted the body work. I am sure our passengers next year will be as impressed as we at the railway, by the end result.”

The Mid Norfolk Railway Summer 2021 operating season programme and timetable will be published in the new year together with ticketing details. This will include the visit of the Flying Scotsman in October as previously announced.