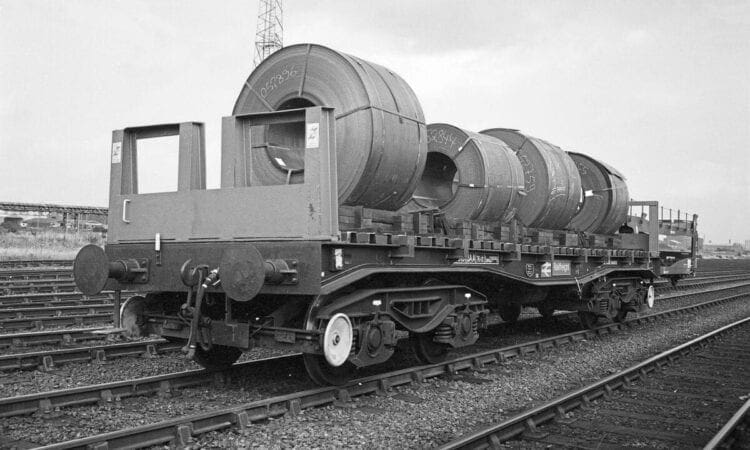 1. A big player for the UK economy

According to the Rail Freight Group, rail freight contributes £870m to the economy and plays a big part in reducing congestion and carbon emissions.

The subsequent loss of most coal movements meant that in 2017/18 overall freight tonnage was recorded at some 75 million conveyed by an average of just over 600 freight trains a day, yet despite this decline, there is still much in the modern railway scene to interest the dedicated freight follower.

The Ministry of Defence, like its predecessors the Ministry of Supply and the War Department, has been an important freight customer making considerable use of the wagonload network to move supplies between its various installations across the country.

Some freight-only branch lines, like those between Andover and Ludgershall and Appleby and Warcop, were retained solely for military traffic.

By the early 1980s military traffic was also the only freight to be seen on several other branch lines, such as the Plymouth to Gunnislake line which saw occasional workings to and from the Royal Navy depot at Ernesettle.

BR’s decision to transfer its wagonload business to the air-braked network had posed a problem for the MoD since the severe curvature of some of the sidings found inside its depots and ordnance factories meant that they could not accept BR’s new long-wheelbase AB vans and opens.

Consequently, between 1977 and 1984, some 50 Pipe wagons and 550 Vanwides were fitted with FAT 19 BR friction-link suspensions and air-braked for continued use in military traffic.

The carriage of both alcoholic and non-alcoholic beverages saw a marked increase during the 1980s, with companies like Grants of St James’s, Perrier Vittel and Taunton Cider all being attracted to the rail by the improved transit times that Speedlink offered.

Water, bottled wine, wine in tank wagons, spirits, whiskey, cider and beer were just some of the drinks which freight trains brought from around the world to UK shores.

Two-axle and bogie ferry vans, plus Cargowaggon and VTG ferry vans were just some of the vans which transported drinks to UK businesses, including the Guinness Brewery in Ireland.

Following the demise of Speedlink in 1991, the import and export flow continued to be handled via the new Connectrail services, but much of the hard-won domestic drinks traffic was lost to road, resulting in closures of private sidings across the UK.

Most metals traffic, such as steel bars, rods, ingots, pipes and sections, was carried in open wagons or, for lengthier items, on bogie bolsters, but in the 1960s the rising demand for motor vehicles and domestic appliances saw an increase in the movement of CRC (cold reduced coil).

Also known as ‘bright steel’, cold reduced coil required protection from the elements and initially, BR converted a number of existing vehicle types for this traffic.

Consequently, in 1986 the South Wales-based wagon builder Powell Duffryn introduced a batch of 55 air-braked covered coil carriers fitted with a one-piece sliding hood and they were immediately put to work on the CRC workings from the steelworks at Llanwern and Port Talbot.

To meet their obligations as common carriers, the early railway companies had built a wide selection of ‘Specially Constructed Wagons’ which were designed to carry large, heavy and often cumbersome loads.

In addition to inheriting many of these ‘Specials’, British Railways would also build a considerable number of such wagons themselves. These often being copies of earlier designs simply updated with contemporary running gear, buffers and axle boxes.

As the country’s road network improved, the movement of such loads by rail declined. By the late 1970s, just a few of these ‘Specials’ had survived, serving customers such as British Steel, the CEGB, the Ministry of Defence and the UK Atomic Energy Authority (UKAEA).

The Changing Face of Railfreight, a new 132-page full-colour bookazine written by David Radcliffe and published by Mortons Media Group. It tells the story of the 60-year history of this huge sector in British railway history, backed up by rarely seen photography from across the decades. Order your copy for just £7.99 from www.classicmagazines.co.uk