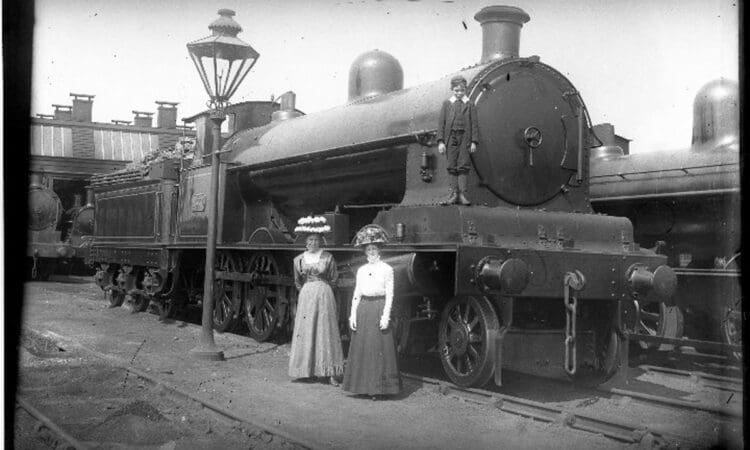 A 100-year-old photo collection showing a family of railway workers in the West Midlands has been donated to the National Railway Museum in York after being found in the back of a wardrobe.

The photographs were taken by George Stainton, an engine fitter and driver for the London & North Western Railway from 1871, including some from his sons, George and Samuel.

They show his family members in front of different steam locomotives, alongside his colleagues, mainly at Bescot Junction Works, near Walsall. The photographs provide a unique snapshot of life on the railways at the turn of the century.

The collection of 21 images, including glass negatives and paper prints, have been donated by Sue Stainton, the great-granddaughter of George, after discovering them tucked away in the back of a wardrobe, following the death of her father.

After finding the photos, Sue and her husband Mark decided to learn more about the family history, and were able to discover names, addresses, job roles and more about Sue’s ancestors in order to try and piece together the story behind the pictures.

Sue said: “It’s been wonderful to find these photographs. I’ve learnt so much about their lives by finding all of this. Giving the collection to the National Railway Museum means that the information can be shared with others, but also that it can be preserved.

“We knew about the old camera, and my father mentioned that he and his uncle had taken photographs before, so we knew a passion for photography ran in the family, but we had no idea that these photographs existed until we found them in the wardrobe.”

The Stainton photos will be added to the national collection and housed at the museum’s Search Engine archive alongside an estimated 1.75m images which document railway history.

The Stainton family’s connection with the railway started with Sue’s great, great-grandfather, Samuel (the elder) in July 1856 when he became a porter at Dudley Port station. Three of Samuel’s sons, including George snr (photographer), joined the railway at different times and in different roles.

George Stainton joined the railway as an engine fitter and by the 1881 census had become an engine driver living in Walsall.

The railways were passed down through the generations, as two of George’s children, worked as engine stokers and then as engine drivers.

Sue’s father, Samuel ‘Don’ Stainton, never worked on the railways after his father refused to let him join however, his passion for locomotives and the railways remained.

Sue added: “My father, Sam Stainton, absolutely adored it here (the NRM) – it was his cathedral. He loved trains all his life, but sadly unlike his father, grandfather, and uncle, he wasn’t allowed to drive them. But he always adored trains and was so passionate about them.

Alison Kay, Archives Manager at the National Railway Museum, said: “We’re so grateful to Sue Stainton for her generous donation of these wonderful images of her great-grandfather and his family.

“The images paint a vivid picture of the railways at the time and the fact we know so much about the people in the photos is a rarity for us. The stories about the family are wonderful and we hope that Search Engine visitors will engage with them and find them as fascinating as we do.”