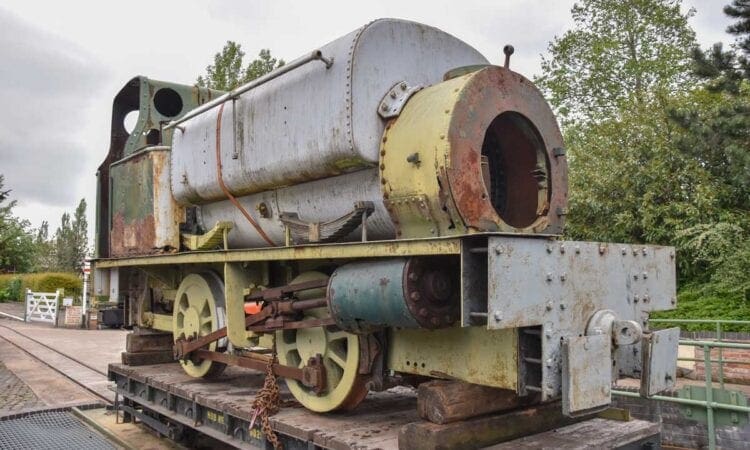 Handyman is a 3ft gauge 0-4-0 saddle tank built in 1900 by Hudswell Clarke in Leeds for the Burton Ironstone Company in Northamptonshire.

It is an example of the many thousands of small industrial steam locomotives that worked on privately owned railway systems at factories, mines and industrial sites across the country.

“Transferring the locomotive will ensure it can be restored and returned to public display for people to enjoy.”

The locomotive spent its operational life moving ironstone at quarries in the East Midlands before ending up at Scaldwell Quarry which ceased operations in 1963.

Handyman was bought by a group of enthusiasts who saved it from being scrapped, but the locomotive was never fully restored and was eventually acquired by the National Railway Museum in 2008 to feature in a proposed display on railway construction.

However, this project never completed. Handyman’s purpose at the museum was already covered by the similar standard gauge Bauxite locomotive which remains in the Science Museum Group Collection.

After completing an application to receive the locomotive, which was then assessed for suitability, the Science Museum Group’s Board of Trustees approved the transfer of Handyman to Statfold Narrow Gauge Trust. Handyman joins the museum and heritage railway’s extensive collection of more than 30 narrow-gauge locomotives.

Statfold Railway and Museum is home to the old Burton to Ashby Tram and one of the largest collections of narrow-gauge historic steam, diesel and electric locomotives in the country.

Henry Noon, Trustee of Statfold Narrow Gauge Museum Trust, said: “We are delighted to have Handyman at the Statfold Narrow Gauge Museum Trust. Not only does it add to our Hunslet and Hudswell Clarke theme it also adds to the narrow-gauge story being told in our dedicated Narrow-Gauge Museum, being our only 3` gauge locomotive. Handyman will now undergo a thorough cosmetic restoration to the same standard we applied with “Hodbarrow”.”

Andrew McLean, Assistant Director and Head Curator of the National Railway Museum, said: “This is a very positive development which will restart the restoration of Handyman which given the amount of work required and the resources available, would not be a viable project for the National Railway Museum. Transferring the locomotive to a new owner in a more appropriate setting, will ensure it can be restored and returned to public display for people to enjoy.”