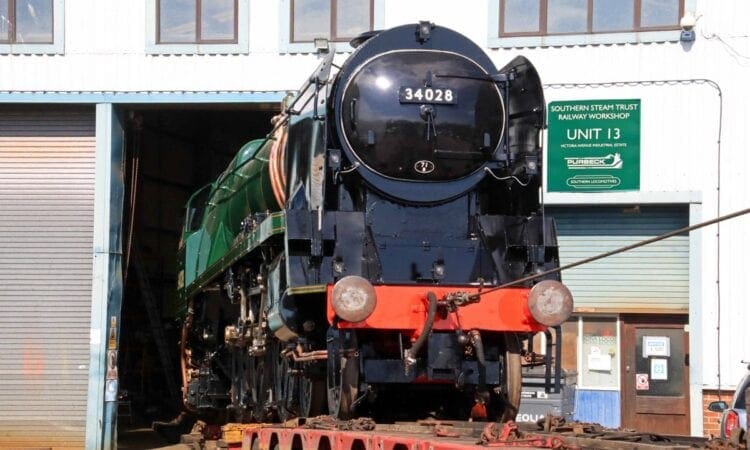 A classic 1940s express steam locomotive has returned to the Swanage Railway after an extensive three year £350,000 overhaul by its owners.

After a period of tests, Swanage Railway hopes to have 1946 Southern Railway rebuilt West Country Class Bulleid Pacific No. 34028 ‘Eddystone’ hauling trains between Norden, Corfe Castle and Swanage by the early summer.

When in British Railways service during the 1950s and 1960s, the locomotive was based at Bournemouth and hauled trains on the London to Weymouth line as well as the Somerset and Dorset line between Broadstone, Blandford Forum, Templecombe and Bath.

Minus its coal and water tender, the  96-tonne machine was transported by road transporter on April 26, from Herston to the heritage railway’s road-rail interchange, west of Norden station, where it was towed by rail the five-and-a-half miles to Swanage station.

Graham Froud, Herston engineering works manager, said: “The staff and volunteers at Swanage are delighted to welcome this established steam locomotive which is a firm favourite with our locomotive crews.

“As one of the last classes of locomotives designed before the end of steam trains, ‘Eddystone’ has many features considered innovative at the time.

“From the enginemen’s perspective, the large and comfortable cab – coupled with a free-steaming boiler and a proven capability for high speed running – made the Bulleid Pacifics firm favourites with footplate crews,” added Graham is also the heritage line’s locomotive superintendent.

“Despite delays caused by COVID-19 – and subject to restrictions in working practices – the overhaul has been completed to a high standard. No. 34028 is one of the Swanage Railway’s fleet of steam locomotives operated as part of a long-standing agreement with Southern Locomotives Limited.”

What happened to ‘Eddystone’?

Rescued from the Barry scrapyard in South Wales – where it languished for 22 years after being withdrawn from British Railways service in 1964 – restoration of ‘Eddystone’ began in 1986 and was completed by Southern Locomotives in 2003 with the gleaming locomotive hauling its first train on the Swanage Railway in the autumn of 2003.

No. 34028 hauled passenger trains on the Swanage Railway for ten years before being taken out of traffic in 2014 for a major overhaul that has taken three years to complete.

To find out more about the restoration and overhaul work of Southern Locomotives Limited, visit their website at southern-locomotives.co.uk.

Steam services have resumed across the Dorset countryside with reopening of the popular Swanage Railway.